While treasury celebrates the launch of the South Africa’s USD1,5Bn dollar denominated bond, the only ones who have reason to celebrate are international investors, and the banks that arranged the sale. With demand in excess of USD7bn for the bond, both treasury and market participants are lauding the fact that the bond was massively oversubscribed. However, this was bound to be the case given that it was offered at a 3% discount to the existing offshore bond issues. With only a marginal cost of funding benefit relative to the local market, a depreciation in the Rand over the coming years can make this bond a very expensive source of funding.

I have previously argued that foreign currency debt is a bad idea for South Africa, as we do not need to take on the massive currency risk that comes with going offshore, given that we have highly developed local capital markets. With treasury’s having a rand based revenue stream, it takes on risk when assuming dollar based liabilities. Countless episodes in the history of emerging markets have shown how substantial this risk is.

The timing of the offshore borrowing is also poor, as the credit crisis has caused South Africa’s bond yield spreads to widen in the offshore market, and diminished much of the cost advantage. The graph below shows the spread of South African debt above US treasuries. 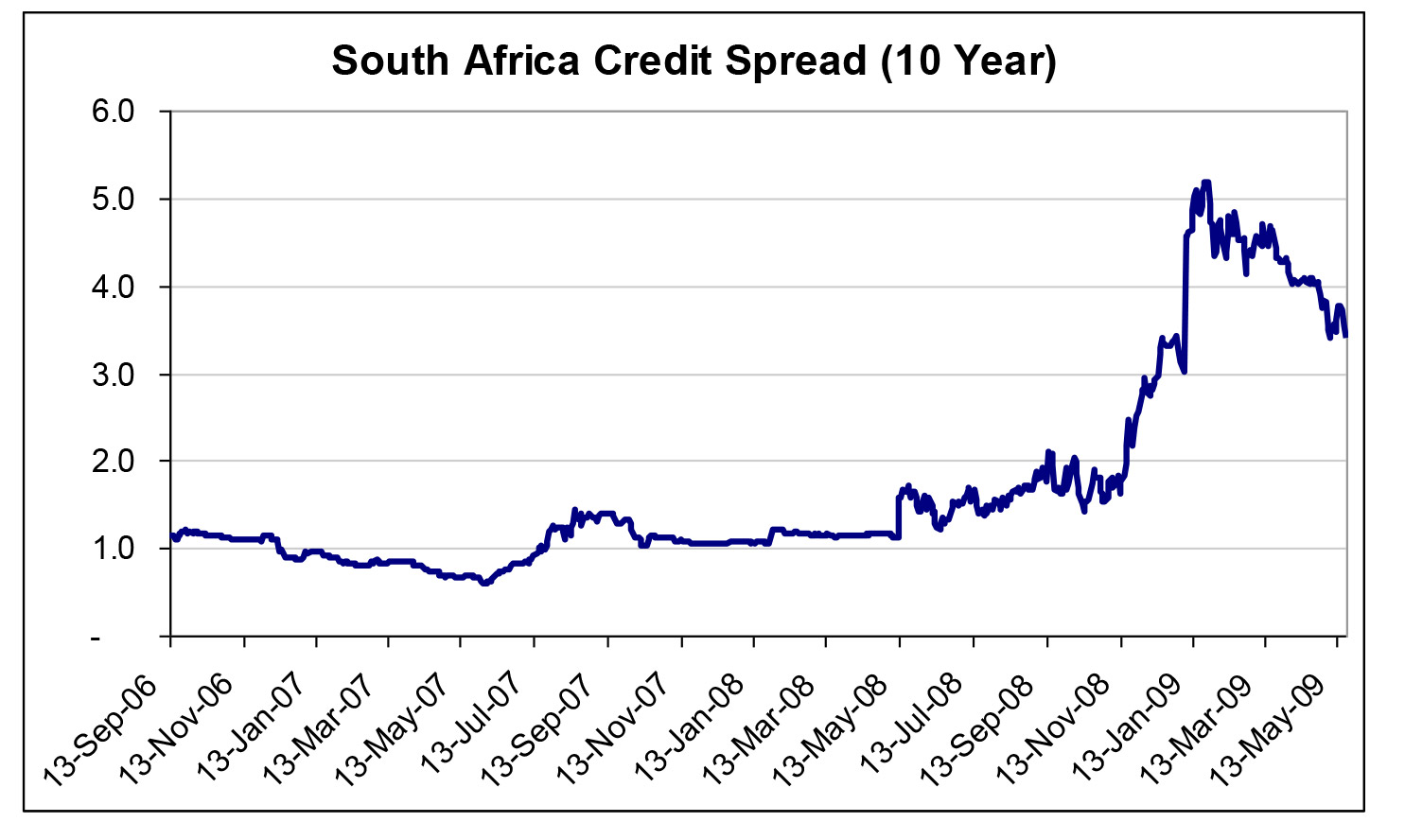 While the spread has decreased significantly from the 4-5% levels late last year, the spread remains wide given
South Africa’s credit quality. South Africa’s new 10 year USD bond was issued at a yield of 7%, while the local 10 year bonds are trading at 8,65%. This is hardly a significant cost saving when one takes into account the currency risk. Anything more than a 1,3% per annum average depreciation of the Rand over the term of the bond, which equates to an exchange rate of R9,65 per USD after 10 years, would render the offshore borrowing more expensive than the local market.

The movements of the Rand will eventually determine whether this offshore bond results in cheaper funding than the local market. Many emerging markets have seen situations where their debt levels have exploded due to currency depreciations, and the currency risk that South Africa is taking has the potential to make this a very expensive exercise. With the current high cost of offshore funding, and the risk that it entails, Treasury would have been better off sticking to the local market.

Page load link
Aeon Investment Management will continue to operate during the COVID-19 lockdown as an essential service provider. If you need to contact us, send us an email to funds@aeonim.co.za or see our contact us page. To learn more about COVID -19 in South Africa and receive official updates from the government, please visit sacoronavirus.co.za Keep Safe South Africa.